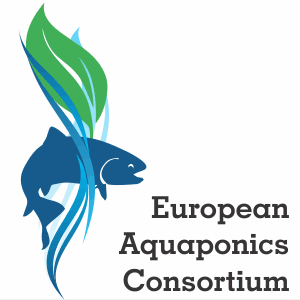 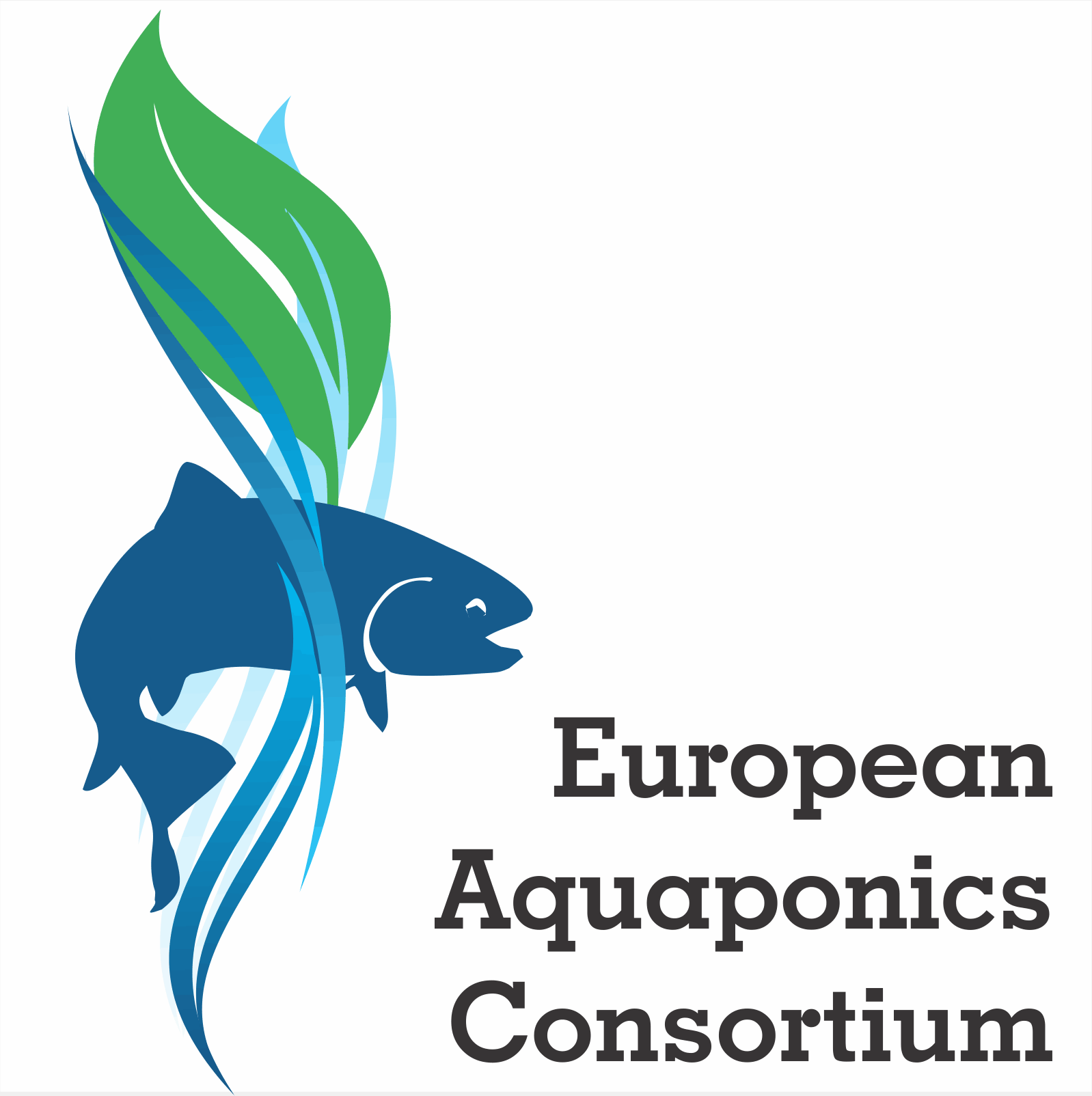 The professional aquaponics world is relatively new.
As a consequence, the first aquaponics urban, semi-industrial and industrial farms are currently new within the world of food producers.
This demands a very specific approach with its own specific challenges.
The first successful aquaponics farms are starting up all over the world, some with – and others with less – success.

All partners of the European Aquaponics Consortium are professionals with at least a few years of experience in the development of bigger aquaponics systems.
We also keep good relationship with other aquaponics networks, such as Baqua, and with the scientific world, to assure we are constantly in tune with fundamental knowledge.

We are proud to present some of the realizations our partners worked on the last years:

Smart Farmers Gent started off with its kick-off project “Urban Smart Farm” in 2015. 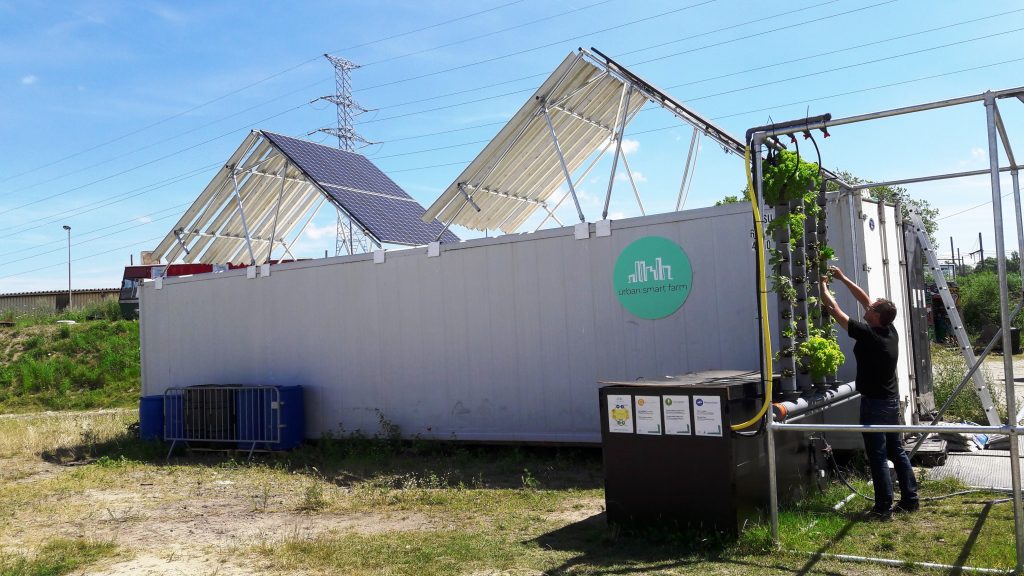 Smart Farmers Gent started off with its kick-off project “Urban Smart Farm” in 2015.
With this project, they won the Gent Innovation Campaign 2016.
The site is build as a scalable prototype for Urban farming.
It is build with containers and combines the the growing of micro greens and vegetables under LED & outdoor, with Tilapia and schimp.

The setup includes solar panels, integration of a soldier-fly system and composting system.

After a successful kick-off project in Vortum-Mullem The Netherlands, Blue Acres realized an Urban project in Eindhoven.
For this, the association “Stichting Duurzame kost” was created.
As part of the city project to refresh the old Phillips factory zone, Stichting duurzame kost built an indoor aquaponics farm with Trout and floating raft systems. 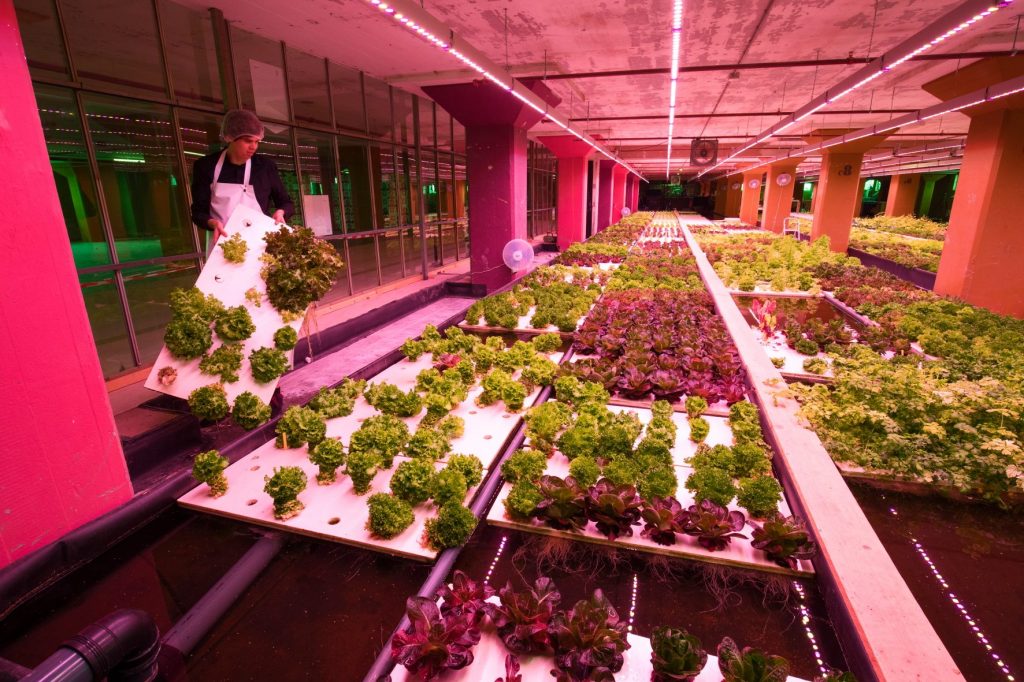 The setup includes Philips LED lights & decoupled aquaculture and hydroculture systems.
A fantastic benefit is the cooperation with a non-profit social organisation: young people are helped with re-integration in the society through aquaponics farming. 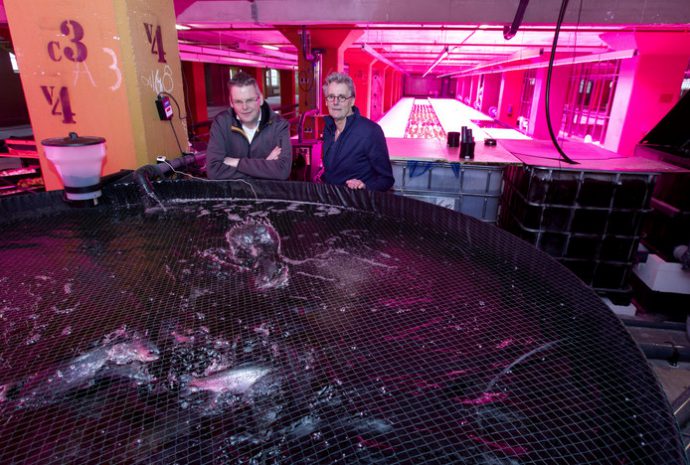 Both herbs & green leafs as well as the trout, is sold in local shops.

More info can be found via the website of Stichting Duurzame Kost. 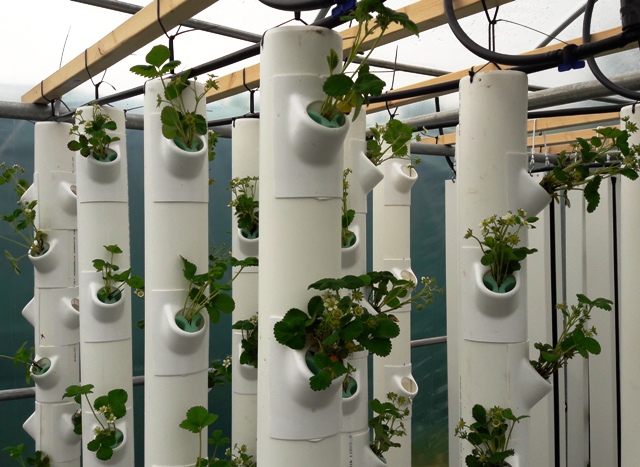 It is placed near to a farm that organises projects for social orientation & community integration of young people. 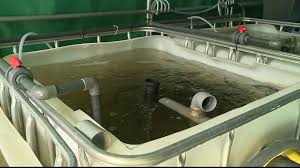 The site is also a testing facility for different kind of vertical grow tubes.

More info can be found via the website of Smart Farmers Gent. 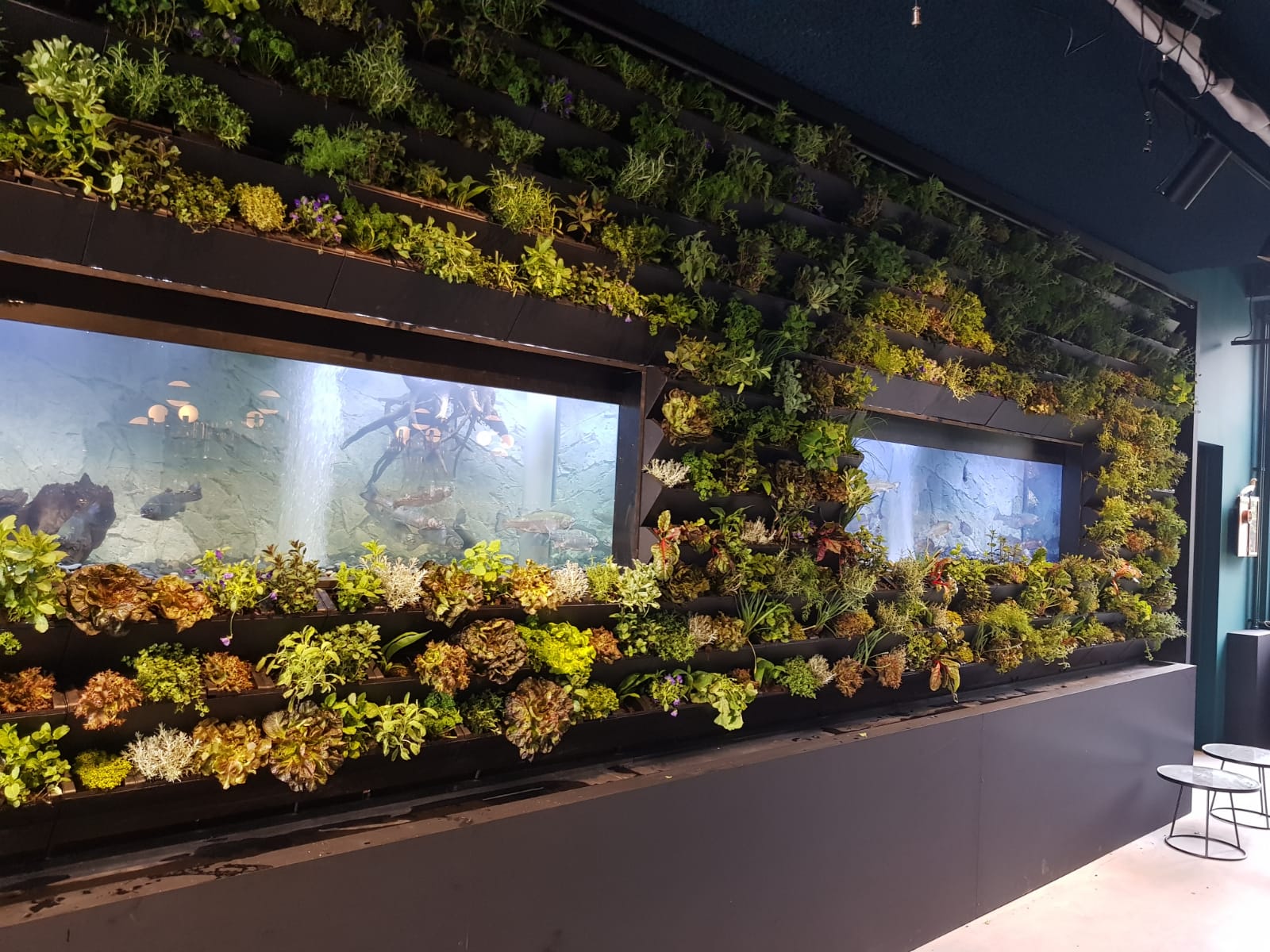 In the new build Westerpark Hotel, one of the most sustainable hotels in Amsterdam. Blue Acres Aquaponics designed and build a 25 m2 aquaponicswall.

Two fishtanks (1300 liters) filled with trout and pikeperch will provide the nutrients for fresh to be picked herbs like basil, oregano, mint, chives for direct use in the kitchen of the hotel restaurant. 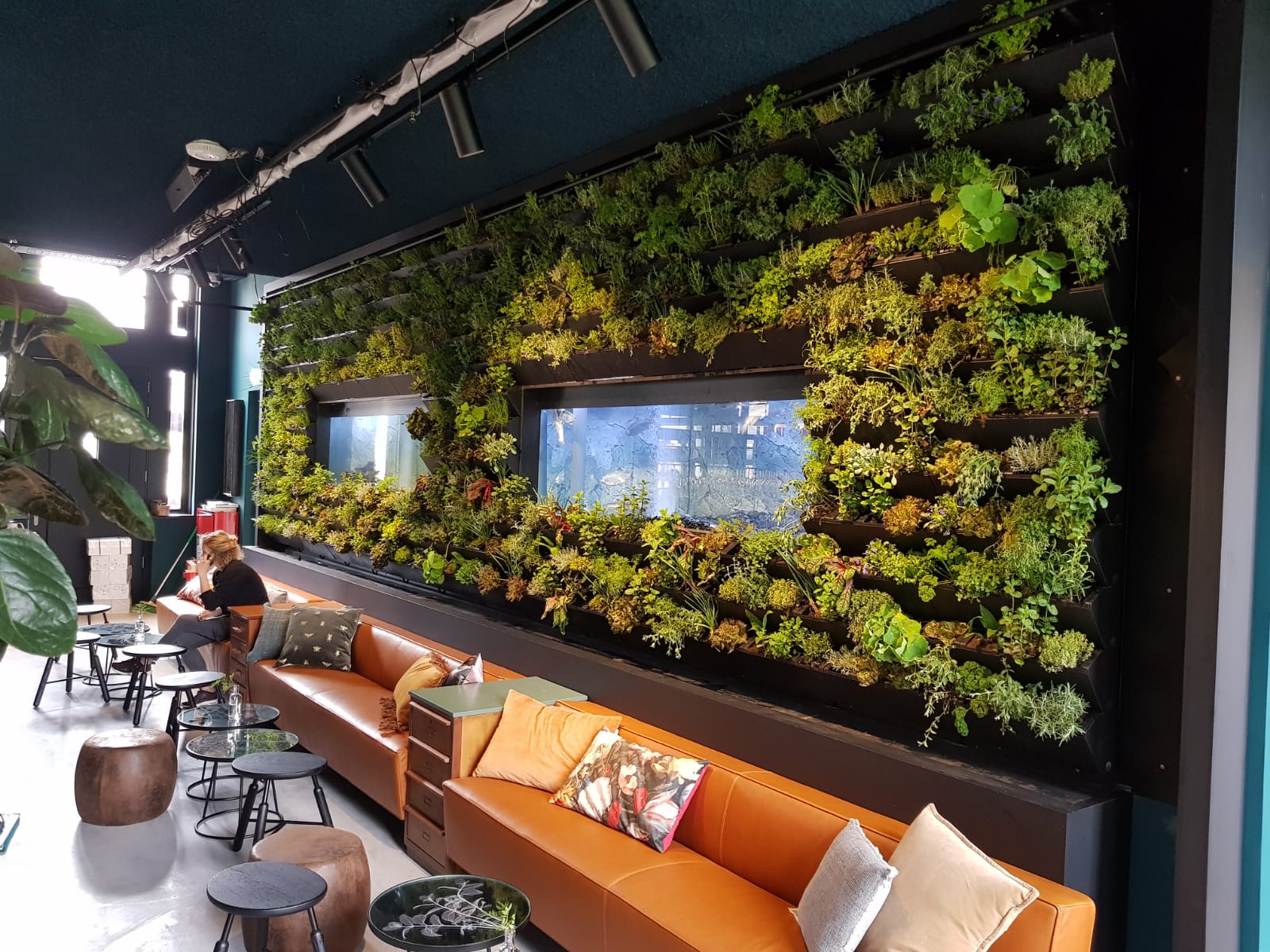